This Memorial Day in the US I’d like to post to thank my great uncle Louis, my grandfather Edmond’s brother and fellow West Point cadet of the class of June 1943.

I’d also like to thank everyone who is or has served in the US armed forces. No matter what your position was, and no matter where you served, please know that we appreciate your service.

My grandfather Edmond and his older brother Louis Anthony Curcuru were both appointed to West Point in the same class by the Congressman from Michigan, which is fairly rare. While Edmond turned towards paratroops – eventually serving in the 101st at Bastogne, Louis turned towards the Army Air Force during his time at West Point.

Sadly, Louis gave his all to his country, and died in a flight training accident while he was serving at West Point. His Howitzer entry reads: 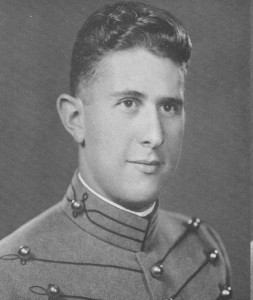 My great uncle Louis Anthony Curcuru, who died while serving at West Point.

On October 29, 2942, Lou Curcuru died doing the thing he liked best – flying. That is good to remember, for not all men is granted such high fortune. However, there are other things to remember: experiences in Beast Barracks, Yearling Summer Camp, primary training, and the years stretching between these landmarks in our friendship.

Academically Lou ranked high, but he was more than a fine student. Matured, orderly, attentive to duty, and purposeful, he possessed a rich fund of jovial good humor and an unforgettable rollincking laugh.
His real love for music and his cultured baritone voice made him an asset to the Chapel Choir, Also, there are memories of truck trips, football trips, maneuvers, and Sunday night sessions when no ‘harmonizing’ was complete without ‘Louie’.

Athletically above average, lou won his numerals in soccer; and, during the winter of plebe year, helped drive ‘F’ Company’s ‘Flaming Devils’ to the intramural hockey championship.

All these things characterized him; but if we think clearly we will think of Lou first in terms of his steadiness and dependability. No, these are not spectacular virtues – but they are invaluable. How many of us can claim them as he could? His quiet, persevering ability was axiomatic; ahd this is the quality which will define him in our minds.

Lou Curcuru: student, pilot, athlete, and singer – but above all, a true and sincere friend to whom we looked always with certain confidence. Through the years we will do well to remember him.”

Thanks to great uncle Louie and to all who serve.